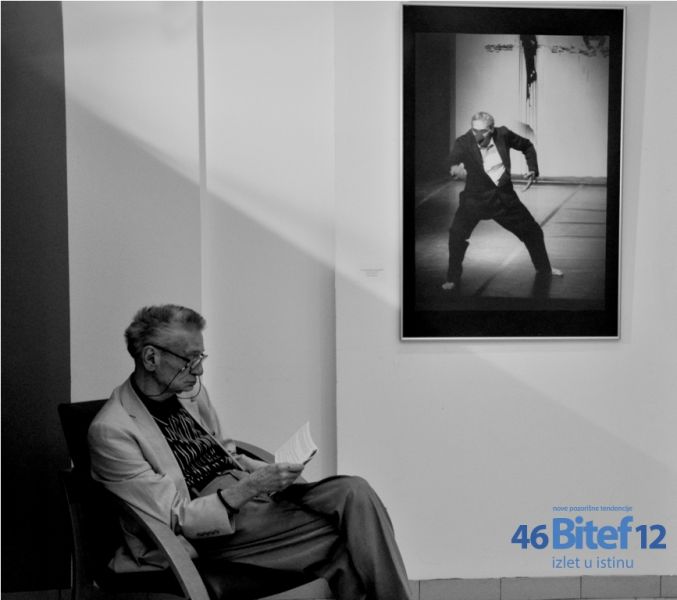 Jovan Ćirilov was one of the greatest figures in the Serbian, Yugoslav and European culture, co-founder, artistic director and selector of BITEF (Belgrade International Theatre Festival), for many years the chief executive of the Yugoslav Drama Theatre,  Atelje 212 dramaturgist (until 1985), prominent theatre researcher, writer, social and theatre chronicler, columnist, translator, polyglot, lexicographer, caricaturist: an international 21st century author. He was awarded many times for his creative opus and contribution to theatre and culture,

He was born in Kikinda on 30 August 1931, In 1955 he graduated from the Faculty of Philosophy in Belgrade and began to work at the Yugoslav Drama Theatre (JDP), first as an assistant director and then as its dramaturgist and artistic director. From 1985 until 1988 he was the chief executive of that theatre. He raised it to a high world level cultivating domestic drama and staging major international works with the emphasis on those not staged in Belgrade before him.
In the spring of 1967 Mira Trailović, the founder and chief executive of Atelje 212, well-known Belgrade theatre, invited him to be the theatre’s dramaturgist  and he held that post until 1985. During that period of time their theatre was the first in Yugoslavia to stage pieces by Gombrowicz, Havel, Kohout, Miller, Vampilov, Canetti, Witkiewicz, Aksionov, Kroetz, Sladek etc.

From 2001 until 2007 he chaired the National Commission of Yugoslavia, subsequently Serbia at UNESCO.

In 1967, Mira Trailović and Jovan Ćirilov founded the oldest and most important international theatre festival in this part of Europe. It was the Belgrade International Theatre Festival (BITEF) the subtitle of which, New Theatre Tendencies, marked the festival for the next fifty years - not as a review of so-called avant garde theatre tendencies but as a selection of productions which prevalently showed the world classics in a novel way or introduced new dramaturgy but was not necessarily experimental and strikingly modernist in form.

BITEF  is the first international festival awarded the Special Prize of the European Theatre Union (Ćirilov received the award on 9 April 2000 at a ceremony in Taormina, Sicily) for extending beyond the boundaries of a festival, it became a place of intensive and profound exchange which, breaking through all the barriers even at a time of strongest divisions, brought face to face the theatre experience of the East and the West within the utopian vision of united Europe and never-ending search for peace.

Jovan Ćirilov was a member of the jury for the Great European Theatre Award, member of the directorate of Mittelfest in Cividale, Italy, and towards the end of the 1980s for two years the selector of the Mondial Festival in Nancy, France. He won the Sterija Award twice: for reviews and life achievement, the October Award of the City of Belgrade for his lifetime achievement and Joakim Vujić Award for the contribution to the Serbian theatre. He chaired the National Commission of Yugoslavia and then Serbia at UNESCO from 2001 until 2007 and was then the chairman of the Board for Culture of the Commission. In 1992 France awarded him the title of Chevalier of the Order of Arts and Letters.

Ćirilov also tried his hand as a theatre director. In 2004 he directed for the first time the drama entitled Nedozvani  (The Unevoked) by poet Momčilo Nastasijević which premiered at the Centre for Cultural Decontamination during BELEF, Belgrade Summer Festival. On the basis of Miroslav Krleža’s text of 1926  in 2112 he directed Izlet u Rusiju, (A Trip to Russia) which had its premiere at the Centre for Cultural Decontamination (CZKD).

Ćirilov drew caricatures. During the 43rd BITEF in 2009 on the occasion of the 20th anniversary of the demise of Mira Trailović with whom he started BITEF, he presented his exhibition Moji savremenici u karikaturi  (My Contemporaries in Caricature). There was no Mira’s caricature. Ćirilov said that he never drew those the closest to him.

To future generations he bequathed a treasure trove of books, documents and his indelible mark in our theatre and culture.

Defying his severe illness Jovan Ćirilov proceeded to work as actively as ever, including the 48th BITEF.

He is buried in the Alley of Distinguished Citizens at the New Cemetery in Belgrade.