BELGRADE INTERNATIONAL THEATRE FESTIVAL – BITEF is one of the oldest, most relevant, most prestigious events and a rarity in the family of major world festivals. It was founded by a decision of the Assembly of the City of Belgrade as a regular annual event of particular importance for the City of Belgrade on 26 December 1967. 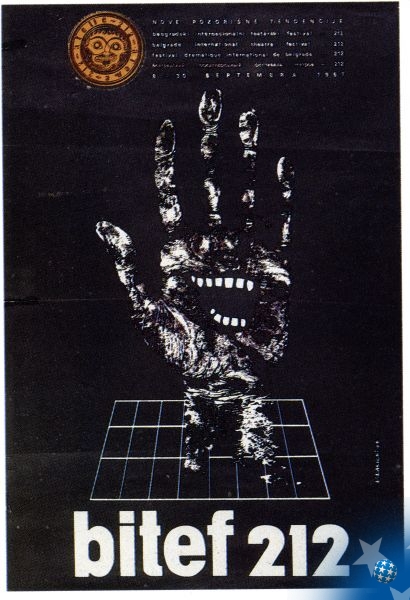 With outstanding promoters of culture at its head, its founders and artistic directors (and selectors) Mira Trailović (Kraljevo, 22-1-1924 - Belgrade 07-08-1989), Jovan Ćirilov (Kikinda, 30- 8 1931 - Belgrade, 16-11-2014), since 2006 as another festival selector - Anja Suša (theatre director) and of 2015 as the new artistic director - Ivan Medenica (professor and theater critic) the festival has ever since its foundation supported and played a significant role in the promotion of novel and new artistic and cultural tendencies and ultimate theatre values.

It acquaints the spectator, indirect analyst and beneficiary with the world’s latest theatre achievements expressed through experimental and traditional form. For almost half a century it has been building our intellectual ties with the world and the world’s ties with us.  Ever-advocating new and open cultural spaces, it has established remarkable contacts, undone fixed artistic hierarchies, encouraged the development of performing arts in Serbia and contributed to its affirmation in a broader context. It has also helped to form domestic theatre critique in the struggle against the parochial spirit and spiritual emptiness. BITEF is an epochal anti-traditional phenomenon of the supreme category in the Yugoslav and world culture.

The festival with its long-standing subtitle New Theatre Tendencies is a set of values, an artistic project which does not communicate definitive truths about the theatre and does not represent; instead, it opens and raises questions about some of the most sensitive issues of the modern public sphere, produced, presented or concealed in special worlds of differences and schisms in arts.

It overpowers modernist dogmas, media boundaries and disciplines and aspires to study, analyse, offer new readings and advances in artistic performance, diverse forms of representational structures and story-telling mechanisms - from prose narratives, i.e. dramatic texts in the literal sense where the literary text precedes the theatrical event to the deconstruction of its autonomy and its interdisciplinary application in other communicational systems (dance, music, pictorial, video, poetic, film, techno, physical, cyber etc. “telling of a story”). Addressing not only the production of a piece or interpretation of the performing act but also their social, political and cultural contexts and effects, BITEF cultivates the power of questioning, criticism, negation and split and does it dynamically, productively and explicitly. Political and cultural barriers notwithstanding, BITEF draws maps, responds critically to new social challenges and problems, opens social and political issues, actively re-examines its own and general artistic and theatre strategies and the ways in which they produce new theatre realities.

Its boundaries are both permeable and soft and highly confronted and tense. This is a festival with a dynamic, sharp, penetrating and comprehensive thematic focus challenged by modern understanding of theatre, performing and visual arts, study of their drift, assertion of different theatre spaces and directions, articulation of different theoretical and critical interpretations, flying in the face of hackneyed, clichéd and often boring patterns of expression and representation on stage…

Throughout the decades of its existence in complex and contradictory social processes BITEF has always kept pace with the exciting evolution of the theatre art, researching how much and in what way philosophy and other scientific disciplines such as theatrology, anthropology, sociology, psychoanalysis, linguistics, theories of culture, gender, media etc make the theatre and, vice versa, which fragments of the theatre they affect.

The concept and programme of every BITEF reflect the zeitgeist, a particular spiritual and artistic cross-section of theatrical research and avant-garde trends aiming to promote new theatre tendencies.

It is often seen as a Belgrade September phenomenon whose annual thematic subtitle emits an orderly and distinctive, purposeful and meaningful content setting in motion and changing the behavior of generations: equally those who “produce” and those who “use” arts and culture.

From its inception until 1989 BITEF has been in charge of Atelje 212 and then, after the foundation of Bitef Theatre, in its charge. Both theatres are important cultural institutions in Belgrade. Bitef Theatre is unique as, at the initiative of Mira Trailović, it rose out of BITEF achievements as BITEF’s theatre and the youngest and only Belgrade project theatre without a standing company. Bitef Theatre has a broad range of programmes, divergent concepts of performance (with no prevailing paradigm) and vertical multicultural contents. Now in its thirties, it remains dedicated to the aesthetic vertical which brought it about - the BITEF Festival.

BITEF is managed by its BOARD consisting of a chairman and four members. The Board and the artistic director are appointed by the Assembly of the City of Belgrade for a term of four years.

The Festival programme is made of the Main and Accompanying Programmes

The Main Programme offers officially selected productions; their number varies from one year to another but of late it has steadied around ten.

Meetings with authors are traditionally organised after the performance

The festival takes place at different venues around the city, in theatres and other alternative spaces.

BITEF is a competitive event. Its five-member jury is selected at the proposal of the festival management. During the first twenty-five years it involved domestic artists and after that prominent figures in international culture.

BITEF has two awards for productions presented within the official selection of the Main Programme:

Grand prix Mira Trailović - for the best production. Until 1990 it was called BITEF Grand Prix.

BITEF Special Award - for the outstanding/exceptional contribution to theatre art in terms of genre, style or means of expression.

On the basis of the poll conducted among the BITEF spectators after each performance the festival also bestows the Audience Award.

As of the 11th BITEF in 1977 the jury of Politika (daily newspaper and other publications) theatre critics awards the best director of BITEF.

BITEF is the first international festival awarded PREMIO EUROPA PER IL TEATRO (Taormina arte, Special Prize for 1999) in recognition of its particular contribution and crucial significance in the theatre art.

On 21 November 2014 Belgrade International Theatre Festival - BITEF - was voted by the users of portal Teater.hr as the best theatre festival in former Yugoslavia

Every year BITEF publishes its catalogue and its bulletin covering the festival in progress. The catalogue offers a critical review of the festival and can be bought on the eve of the festival opening. The bulletin is a short publication following current events, published every festival day.  Since the 43rd BITEF 2009 it is also published as a blog and can be found at http://www.bitef-blog.rs

The 1960s were more focused and more clearly determined to change the world and rebellious generations of artists and intellectuals were more ready to become socially committed. A number of events during that decade marked the 20th century: Berlin was split in two, Nikita Khrushchev resigned, Kennedy and Martin Luther King were assassinated; in response to the USA intervention in Vietnam flower children were born; the cultural revolution broke out in China; students revolted in Europe and rock-and-roll and the Beatles set out to conquer the world. New arts and technologies flourished; there were Radio Luxembourg, non-aligned conferences; Orient Express and buses linked West and East via Belgrade; European premiere of Hair… In 1967 Belgrade, BITEF and a fantastic generation of young artists of all media welcomed Grotowski, Living Theatre, Godot, Beckett, Ionesco…Krejča, Ronconi, Brook, Stein, Richard Schecner and others came to our city.

A great world theatre adventure began then. A life-changing adventure.

During the first ten years or so BITEF selectors brought to Belgrade some of the most courageous stage experiments. Desirous of seeing, by means of the criticism of the notion of originality, the true distance between the classical, modern and post-modern theatre and the variations of classical themes in contempoirary  readings, they confronted the public with the theatre of transformation, deconstruction of the dramatic narrative, new stage speech, drama theatre without words (physical and dance theatre), divested human body, fragmented stage space and venturing out into city streets, group authorship, experimental and political theatre, guerrilla theatre…

In the ‘80s and ‘90s BITEF presented the highest achievements of the postmodern theatre offering as themes the processes, purpose, meanings and values in out-of-theatre and within-the-theatre aspects occurring when transferred from the possible world of culture into theatre, i.e. from theatre into the possible world of culture. During the political-economic crisis and embargo, the war and wars in the former Yugoslavia, bad leaders, villains and victims, historical blindness… it managed to bring to Belgrade some of the greatest names in theatre and promote the highest cultural values of stage arts in 1990s.  Yes, it was important - for all those generations which grew up and created, at the time of government without ideology. Those years were marked more by culture, art and theatre than by the political time in which they lived. Generations of young directors, playwrights, set designers, players… grew up alongside BITEF. Today their presence is felt as they build on preciously on the former achievements and introduce “otherness” to stages in Belgrade and across the region.

In the early 21st century in addition to showing topical and innovative achievements of the world “mainstream”, echoes of the avant-garde, theatre laboratories and attempts to transform the theatre into a complete world of art (Gesamtkunstwerk), post-drama and non-verbal theatre, theatre in the time of culture, new drama theatre etc., BITEF also introduces practices whose part are artistic processes realised with new technologies and thus joins the new avant-garde of the meta-media society. It thereby points at complex social and cultural changes occurred under the influence of science, technology, new world neo-liberal market order and globalisation and opens the door to the virtual reality, pluralism of ideas, views and perspectives proffered by the era of “cyber and biotechnological” theatre.

BITEF programmes attest to the fact that art is born out of controversial and complex processes induced by disparate, non-homogenous events and developments which we can view through different histories when the artist, researching and relying on the existing artistic or non-artistic products, transposition of elements from one into another system of meanings or artistic discourse, “ceases” to be a creator “only” and becomes a subject which signifies and uses. At this moment it is impossible to see either the beginning or the end of new artistic products. BITEF which has always encouraged topics about the condition and tragedy of man, which was one of the first to emphasize the importance of traditional forms of the Oriental theatre such as Kathakali Dance Theatre (the first BITEF premiere in 1967) or Beijing Opera, Bali Theatre etc.,  announced the 21st century as a possible space for discussions about this subject without claiming that art can transform the reality as romanticism wanted it but that it can criticize the utopias, rather than serve them.

An important number of artists participated in BITEF: from the most prominent, most characteristic, most revolutionary to those who were not recognised on the world theatre stage or were known but a little yet have become a part of the theatre history owing to the festival’s unbiased selectors guided by their intellectual courage, independence of choice and ability to assess the productions’ achievements and present them at the festival:

The festival is also the value added to our and the world culture which responsibly and actively produces, cultivates and proliferates arts and culture. A part of its programme orientation crosses those boundaries and assumes the role of a committed social factor.