Life in theatre equals my life 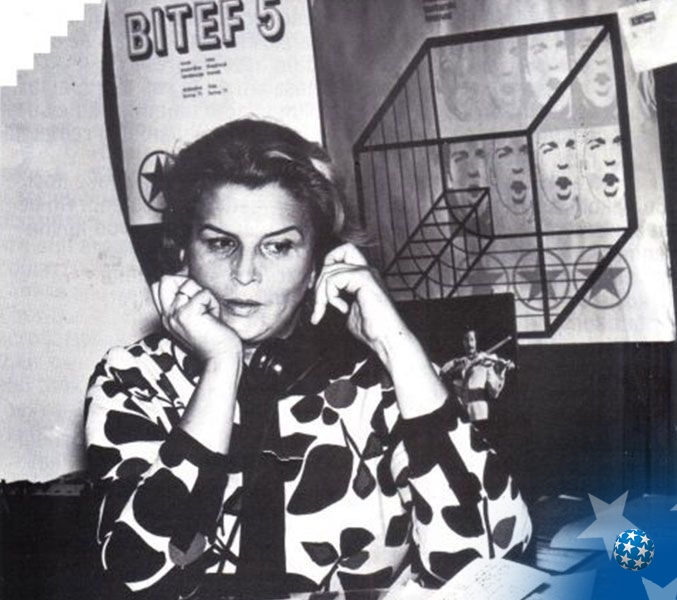 Born to Andrej Milićević, translator of more than 36 books by French classics and Radmila Simić, French teacher. Her grandfather Milan Simić was the chief executive of the National Theatre in Belgrade. She realised that the privilege of having been born to a home of educated parents and grandparents meant also a burden because she had to fulfil both their and her own expectations. A diligent pupil of the Girls’ Secondary School in Belgrade, secondary music and acting schools, Mira Trailović first graduated from the Academy of Music and then, in accordance with her father’s wish began to study architecture but gave it up after two semesters. During the second year of studies she also quit the studies of applied chemistry and art history on the eve of the graduation exam. What attracted her were television, drama, direction and theatre so that in 1950 she graduated from the High Film School and had her debut two years before the graduation.

In 1944, in her youth, Mira Trailović was, among other things, an announcer and editor of Radio Belgrade drama programmes. Her Minerva-like voice kept the listeners spell-bound. At that time the curfew was still on so a police patrol accompanied her home every evening. And she was not afraid as she walked in her first overcoat made of a blanket donated by Radio Belgrade. She knew that that day she had made a day for someone. We were reading on the radio letters arriving from the front and going to the front, information about the war that was still going on. We were offering people the possibility to learn something about their nearest (Interview with Mira Trailović, TV Novosti 1977).

She directed some 70 radio plays for Radio Belgrade where she met and married Dragoljub Guca Trailović, then an announcer and later Politika correspondent from Paris and took on his surname.

Her direction of Faustus on 12 November 1956 in a hall with 12 chairs belonging to a former newspaper Borba marked the beginning of life of a new world: avant garde theatre Atelje 212 came into being. One of its founders and then for many years the chief executive of Atelje 212 was Radoš Novaković. His and Mira Trailović’s exceptional energy made Atelje 212 a cult place.

A new epoch was on its way. Under her leadership Atelje 212 broke through the Yugoslav boundaries and in time became a theatre with a world reputation as the first theatre in SFRY invited to tour the USA after World War II. The actors of Atelje 212 toured countries where until then it was impossible to hear our language.

Theatre director whose pieces were invariably avant garde  (she abhorred the word) introduced truly novel cultural and political trends in Belgrade’s theatre life. She was the first to show to the Belgrade public the most significant names of the world theatre avant garde: Ionesco, Sartre, Albee; she presented to the public new domestic authors staging Dušan Kovačević and Aleksandar Popović. In revolutionary 1968 the public left the theatre breathless after the performance of hippy musical Hair directed by Mira, its first European production after the US world premiere of what was to become an iconic musical.

She directed over 30 relevant productions, notably: No Exit, Don Juan in Hell, Čudo u Šarganu (Miracle in Šargan)...

During her time popular and controversial Atelje productions like Kafanica, sudnica, ludnica largely pushed back the political boundaries of the freedom of expression.

Mira Trailović brought the spirit of the West to Serbia, but her greatest gift was the ability to organise and select a good team.

Together with Jovan Ćirilov and others Mira Trailović initiated the establishment of one of the major European theatre festivals. BITEF, Belgrade International Theatre Festival which originated in Atelje 212 in 1967. She was its artistic director from the beginning until her demise. During the cold war this festival of new theatre tendencies was a unique place where artists from both sides of the iron curtain met and exchanged experiences. Her and Belgrade guests were Samuel Becket, Peter Brook, Jean-Paul Sartre, Bob Wilson, Living Theatre, Pina Bausch, La MaMa, Grotowski and many others bringing the breath of the big world to our midst and providing for Belgade a significant place on the international theatre stage.

Owing to her efforts the festival founded its, BITEF’s, or rather Mira’s theatre: Bitef Theatre which, as of the 20th BITEF organises the festival and pursues its programme policy in the spirit of BITEF.
Art begins when some mysterious and unknown forces in man and epoch come together. I am happy that Belgrade will have yet another place where artists and spectators will try to touch at times that mystery of human existence (excerpt from Mira Trailović’s speech at the inauguration of Bitef Theatre).

She used to say that she did not care much for awards however flattering they might be. And she won so many of them! They flooded in from all sides as befitted her option of a citizen of the world. The October Award, Joakim Vujić, Seventh of July, Popularity Oscar, recognition by the Association of American Theatre Artists and that of the Embassy of Germany for the contribution in the field of culture, Bulgarian and Czechoslovakian societies, the award bestowed on her by the President of Italy Giuseppe Saragat and the Order of Commander received from the French Minister of Culture Jacques Lang are only some of the official tributes to Mira Trailović’s work.

She passed away defeated by the disease in Belgrade on 7 August 1989, a few months after she „got“  her theatre. Mira Trailović was buried at the New Cemetery (plot 12, tomb 31 II) in the presence of her family and closest friends only in accordance with her wishes.

Shortly afterwards the space in front of the Bitef Theatre was named Mira Trailović’s Square.
The big stage of Atelje 212 was named after Mira Trailović in 2014 (90 years since her birth and 25 since her death).

In 2016, following an eight-year old initiative in the foyer of the Kraljevo Theatre a memorial plaque dedicated to her was placed. It was made by sculptor and professor at the Faculty of Fine Arts in Belgrade Slavoljub Caja Radoičić.

Three years ago the Museum of Theatre of Serbia published Feliks Pašić’s book about her work entitled Mira Trailović, gospođa iz velikog sveta (Mira Trailović, a Lady from the Big World).
She was possessed of charm, was persuasive and knew no uncrossable boundaries. In 1971 when asked what he had seen in Belgrade, Eugene Ionesco replied: Mira Trailović Isn’t that more than enough?

Once, when the journalists asked her to introduce herself, she said yes and like a poem „recited“ the acronym of her name: M for  mindful, I for irrational, R for radiant and A for ah, I couldn’t care less. Mira. Mira Trailović

Mira Trailović was a singular figure, worthy of all respect and a seriously-minded lady even when this was not particularly advisable and popular. She had a sound civil and intellectual background  when, after the liberation, she became Radio Belgrade’s announcer, then director and editor of the drama programme, a student of the Academy of Music and the High Film School and teacher of radio direction at the Theatre Academy. Among the founders of Atelje 212 (and there some very forceful and remarkable personalities) Mira Trailović had the persistence and vocation to devote herself to this project and turn a sporadic production by,  one might say, a group of conspirators, into a standing theatre whose productions were seen  in Paris, New York, Moscow, Caracas and Mexico. How this particular lady, a person largely bound to tradition and lover of old-fashioned things, became the key figure in the modernisation of our theatre, from the so-called theatre of the absurd and documentary drama to rock opera and finally inevitable post-modernism,  can be explained, above all, by Mira Trailović’s cosmopolitan spirit, her globe-trotting passion and polyglotic ease. The idea of BITEF came logically as she strove to rid Belgrade and thereby the Yugoslav theatre of parochialism.  Today it is difficult to imagine how much of the personal vision - and courage too - was necessary  in 1967 to invent BITEF and in the face of huge cultural,  guild and ideological resistance to this world festival of „new theatre tendencies“ give it momentum (excerpt from  In the World’s Window (1990), a text by Dragan Klaić (1950 -2011) .