After visiting several dozens of towns all around the world, the project by Stefan Kaegi and Jörg Karrenbauer, and the famous Rimini Protokoll company, under a generic name Remote X which gets reformulated into the name of the town it visits, finally comes to Belgrade. After the premiere on the Prologue Day, it will be performed every day throughout the festival, because it interweaves both of the golden threads of the main programme, the artistic and the thematic one. The project is completely immersive, since the audience do not simply blend into a given dramatic situation but, since there are no performers, they create it, although not singlehandedly. Following the instructions coming through the headphones, the audience walk through Belgrade, from one spot designated by the authors to another. It creates a powerful, sensual experience of being a part of the community, while making it possible for everyone to process it alone. A very smart text makes us ponder if we are familiar with the town we live in, if we feel better in a group or alone, how we feel in the community, if we walk through our lives alone, or are we led by a superior mechanism.

In Remote Belgrade, a group of 50 people set off into the city wearing headphones. They are guided by a synthetic voice - as we know them from GPS navigators. The encounter with this artificial intelligence leads the group to perform an experiment on themselves. How are joint decisions made? Who do we follow when we are guided by algorithms?

50 people watch each other, make individual decisions and yet remain always part of a group. While the artificial intelligence observes human behavior from a distance, the voice, step by step, sounds more familiar. Along the way, binaural recordings and film scores provide a soundtrack for the urban landscape. The journey through the city feels more and more like a collective film.

Remote Belgrade questions artificial intelligence, big data and our predictability. As the project tours from city to city, each new site-specific version builds upon the dramaturgy of the previous city.

STEFAN KAEGI produces documentary theatre plays, radio shows and works in the urban environment in a diverse variety of collaborative partnerships. Using research, public auditions and conceptual processes, he gives voice to ‘experts’ who are not trained actors but have something to tell. This is how he directed Mnemopark, a model railway world in the Basel Theatre - a live film (set in 1:87 scale) that has been shown in over thirty cities between Tokyo and Montreal. Kaegi has toured across Europe and Asia for over three years with two Bulgarian lorry drivers and a lorry converted into a mobile audience room (Cargo Sofia). In 2008, he developed Radio Muezzin in Cairo - a project about the call to prayer in our age of technical reproduction, and in 2011, Bodenprobe Kasachstan about migration and oil in central Asia. At the moment, he is touring with Remote X, a modular site-specific audio-tour for hordes of 50 listeners. In 2010, Kaegi was awarded the European Prize for Cultural Diversity. In 2011, Kaegi curated the “Idiom”- section of the Malta Festival Póznan. Kaegi co-produces works with Helgard Haug and Daniel Wetzel, under the label “Rimini Protokoll”. Rimini Protokoll’s purpose is to pry apart the sense of reality and present all its facets from unusual perspectives. Rimini Protokoll was awarded the Faust Theatre Prize in 2007, the European Prize for New Theatre Forms in 2008 and in 2011 the silver lion of the Biennale for Performing Arts in Venice. The multi-player video-installation Situation Rooms about the weapons-industry got the Excellence award at the 17th Japan Media Festival. In 2015, Stefan Kaegi has received the Swiss Grand Award for Theatre / Hans Reinhart Ring.

The voice Margaux, a faceless shepherd, takes the possession of our body and we are forced to analyse our behaviour in order to recognize our weaknesses, our indifference to others, our loss of power in the face of technology and the ephemeral nature of our passage on Earth. And shows us that the city is a scene that we do not always appreciate at its true value. No matter where the performance takes place, it is our identity and our free will that Margaux puts to the test.
Florence Vierron, Le Figaro

We are the reverse version of the Japanese saying, “An arrow breaks, many arrows do not break”. Because the more we are, the easier we break. Alone, unseen, I may be able to resist the voice. But in the group? “Go over the traffic light,” the voice says. “Even if it’s red.” We hurry and obey. “Every traffic light,” says the voice, “is a little lesson in automated dictatorship.”
Axel Weidemann, Frankfurter Allgemeine Zeitung

“What happens if you decide not to participate?” says Karrenbauer. He continues: “This kind of technology pretends to improve our lives, to help us through day to day, guiding us in the car, but potentially, in the future, telling us what to eat and drink and think. Big data companies are gathering that information. Remote X lets us be led by it and asks whether or not we’re comfortable with that.
Matt Trueman, The Stage

“Remote X” is a production of Rimini Apparat.

Supported by:
Capital Cultural Fund Berlin and by Swiss Arts Council Pro Helvetia and Fachausschuss Tanz und Theater Kanton Basel-Stadt. A House on Fire coproduction with the support of the Cultural Program of the European Union. 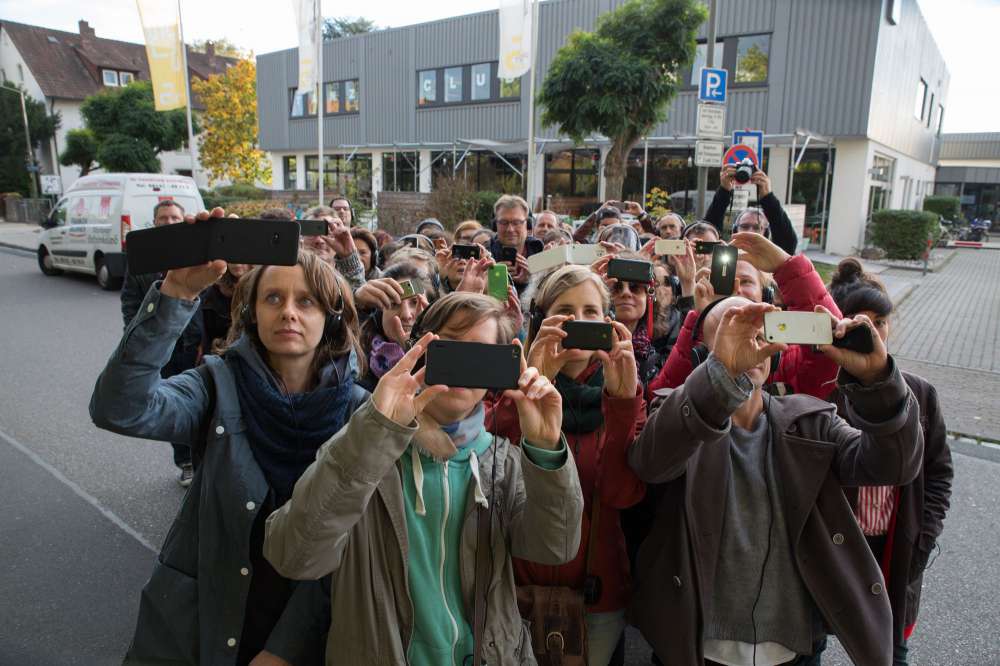 “Remote Belgrade“ as understanding of community